Pieter Hugo is a South African photographer who primarily works in portraiture and whose work engages with both documentary and art traditions with a focus on African communities. Hugo has called himself “a political-with-a-small-p photographer”. He acknowledges that fact that “the power of photography is inherently voyeuristic” and that he wants “that desire to look to be confronted.”

The featured photographers shown are from 3 separate series: : “RWANDA 2004: VESTIGES OF A GENOCIDE”, ‘The Hyena & Other Men’, his most recognized work, and ‘Permanent Error’.

‘The Hyena & Other Men’ Features portraits of Nigerian men with Hyenas, Monkeys, snakes and other “wild” animals as pets. These men had a cloud of “myths surrounding them.” Nigerian newspapers reported that they were bank robbers, bodyguards, drug dealers, debt collectors. “

“We found them living on the periphery of the city in a shantytown – a group of men, a little girl, three hyenas, four monkeys and a few rock pythons. It turned out that they were a group of itinerant minstrels, performers who used the animals to entertain crowds and sell traditional medicines. The animal handlers were all related to each other and were practicing a tradition passed down from generation to generation.”

“I realized that what I found fascinating was the hybridization of the urban and the wild, and the paradoxical relationship that the handlers have with their animals – sometimes doting and affectionate, sometimes brutal and cruel.” 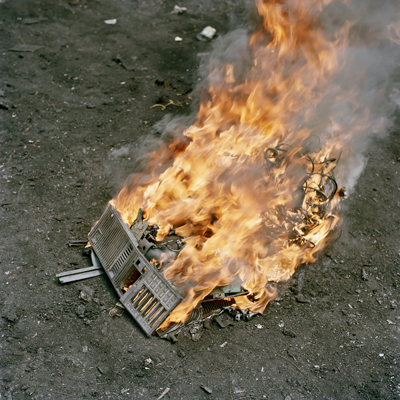 In 2011, Hugo created his series ‘Permanent Error’ where he photographed the people and landscape of an expansive dump of obsolete technology in Ghana called Agbogbloshie.

When Hugo asked the inhabitants what they called the pit where the burning takes place, they repeatedly responded: ‘For this place, we have no name’.

Their response is a reminder of the alien circumstances that are imposed on marginal communities of the world by the West’s obsession with consumption and obsolesce. This wasteland, where people and cattle live on mountains of motherboards, monitors and discarded hard drives, is far removed from the benefits accorded by the unrelenting advances of technology.
“The UN Environment Program has stated that Western countries produce around 50 million tons of digital waste every year. In Europe, only 25 percent of this type of waste is collected and effectively recycled. Much of the rest is piled in containers and shipped to developing countries, supposedly to reduce the digital divide, to create jobs and help people. In reality, the inhabitants of dumps like Agbogbloshie survive largely by burning the electronic devices to extract copper and other metals out of the plastic used in their manufacture. The electronic waste contaminates rivers and lagoons with consequences that are easily imaginable. In 2008 Green Peace took samples of the burnt soil in Agbogbloshie and found high concentrations of lead, mercury, thallium, hydrogen cyanide and PVC.”

Another series titled “RWANDA 2004: VESTIGES OF A GENOCIDE” offers a forensic view of sites of mass execution and graves that still stand lingering 10 years later as memorials to the thousands of people slaughtered.”

Many questions arise from these photographs: Why had nobody cleaned up these sites yet? Why were there no international commemorations? How does a divided society which has gone through something as terrible as this manage to co-exist? How would we have reacted if the death camps and mass graves of Auschwitz had been left open for 10 years? If nobody buried those slaughtered at Normandy?