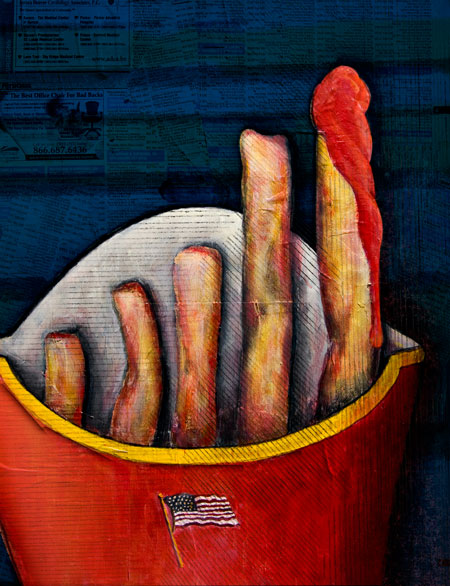 If you haven’t already heard, America is expanding.

Three of five Americans are overweight; one of every five is obese. Twenty years ago, no state had an obesity rate higher than 15%. Today, only Colorado is below 20%. Because of this increasing largeness, diabetes rates have also risen substantially. The only thing that is not projected to rise, but to fall, may be the life expectancy of the next generation.

So how did obesity become a nation-wide epidemic? There are many reasons attributed to our growing bellies. These range from issues of modern lifestyle (we don’t have to hunt or gather our own food), to affluence (more people can afford a high-fat diet), poverty (healthier foods cost more), to technology (fewer of us use our bodies in our work), clever marketing (super-sized portions; advertising to children), to changes in diet (more fats; more carbohydrates; more processed foods).

According to author Michael Pollen, one of the biggest reasons why we are getting heavier can be attributed to the way we are growing and processing our food. Pollen’s long and arduous mission of tracing food through our modern industrial agriculture system has revealed the fact that a vast majority of our eating habits are almost completely dependent on food originating from one crop: corn. Corn’s cheapness; its ability to grow in diverse conditions; and its tolerance for industrial pesticides has had a major influence economically on the way in which we package, ship and sell food. By producing food containing highly processed and refined corn sugars, acids, starches, alcohols and ethanol, shelf life of food is significantly extended, making it easier to sell and consume regardless of when or where it was originally produced (This one of the reasons why convenience food companies like McDonald’s, Coca-Cola, and General Mills have seen such success).

Here’s the catch: This way of producing food is very fattening and unhealthy, as the processed corn ingredients have had many more calories packed into them than would be in natural “whole” foods. America’s fast paced lifestyle and the inherent human attraction to calorie dense foods has made us addicted to abnormally high calorie meals. One of the most prominent culprits is high fructose corn syrup. As one of the most widely used and most fattening ingredients used in food production today, HFCS is in our soft drinks and snack foods, our ketchup, breads, cereals, our hamburgers, deli meats and hot dogs. Take a look in any average kitchen cabinet and it will quickly become clear why we have a collective weight problem.

In response to the obesity epidemic, numerous organizations and farm-to-school programs have sprouted to promote fresh fruits and vegetables in lunch cafeterias. Some states have even allowed food stamps to stretch further when buying healthier foods. A food conscious generation could be on the horizon, but we still have a long way to go: in the 1970s, only 5 percent of American children were obese. Today, that percentage has tripled, and even quadrupled in some regions.

I am in no way the poster child for healthy eating or responsible shopping decisions, but with a bit of awareness and a few tweaks in our buying habits (myself included), we can reverse America’s heaviness.