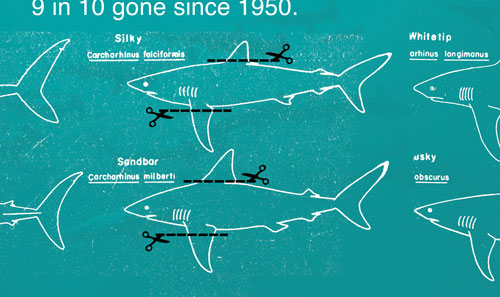 With a little investigation, it becomes no mystery that many of the world’s ocean species are very much in decline. Between the all out massacre by the world’s growing industrial fishing fleet, toxic oil spills, ocean acidification, coral reef die-offs and growing “dead zones”, it should come as no surprise that since 1950, there has been a 90 percent drop in the numbers of twenty-five of the ocean’s largest predators. It is not just the large predators or species of fish we physically eat that fall victim to mankind’s activities. All levels of the food chain, in one way or another have been dramatically affected by human activity.

9 out of 10 sharks, for instance, have seen their numbers decline sharply in the last half-century. Aside from being caught and killed by accident from industrial trawlers, longlines, nets and dredges, the recent upswing in popularity of shark fin soup is now the sharks greatest threat. It seems that the sharks, not the beach-goers have become the victims.

Virtually flavorless, unreasonably tough to eat, and ultra expensive (a pound of fin goes for at least $300), shark fin has been considered a delicacy, a symbol of wealth in Asia for centuries. As one of the most “controversial, wasteful, and certainly brutal” ways of harvesting meat, the “business” of shark fin soup has seen a boom in recent years due to the rising economic conditions in China.

That means that more people than ever before can afford to “enjoy” shark fin soup. The result of this is nothing short of tragedy. “Over 70 million sharks hooked worldwide each year have their fins hacked off and their still-living carcasses tossed back overboard as soon as they’re caught.” Without their fins, millions of sharks throughout the world’s oceans die from bleeding to death and starvation.

Text in quotes taken from “Oceana: Our Endangered Oceans and What We Can Do to Save Them” By Ted Danson and Michael D’ Orso. This book, powered by Oceana, and beautifully designed by Headcase Design, is a great read for anyone who loves seafood. A quick but powerful read, this book will change the way you view the oceans and our collective fishing practices.

To learn more, visit Oceana.org
Also, check out the wonderful documentary film, The End of the Line.